Downfall: The Demise of a President and His Party 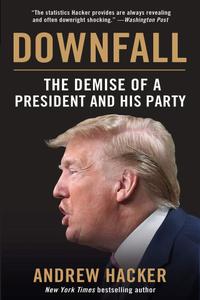 Take a tour through the elections since 2016 and the Republican Party’s​ strongest stances to understand the impending defeat of Donald Trump in the 2020 Presidential election.

Downfall does not offer a prediction or wishful thinking—it affirms a certainty. Veteran political scientist Andrew Hacker’s collection of evidence points to the conclusion that Donald Trump will not be reelected, regardless of which Democratic candidate opposes him. Based on a close analysis of midterm and special elections, Hacker has found that Trump’s so-called base is shrinking and that a strong majority of voting Americans want Trump out of office.

Alongside comments from Republican Party members on why they stand with their party, Hacker autopsies their most steadfast viewpoints to illustrate from where these opinions stem and why Trump supporters provide him with votes.

Both a look back at the years since Trump’s election and a glimpse into what lies ahead for politics, Downfall provides an optimistic outlook that the most divisive leader in the US’s history will join the ranks of one-term presidents.