Primitive: Tapping the Primal Drive That Powers the World’s Most Successful People 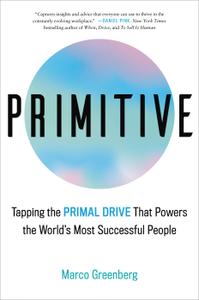 “Marco Greenberg’s Primitive captures insights and advice that everyone can use to thrive in the constantly evolving workplace.”
—Daniel H. Pink, New York Times bestselling author of When, Drive and To Sell Is Human

As a close advisor to visionary startup founders and established CEOs, Marco Greenberg discovered something about the most successful people he knew: They had remarkable instincts, and they trusted them. They had an intuitive grasp of when to ignore convention. No matter how sophisticated, they could access something else—something primitive.

It’s a loaded term. But as Greenberg dug deeper, he saw a mindset that helped certain people to overcome challenges that stopped others cold. From a former roadie for the rap group N.W.A to a rock-star brain surgeon, from young tech billionaires to a top-ten college football coach, Greenberg demonstrates how a range of successful people—those he calls “primitives”—ignore what they “should” do and instead tap a primal drive to power ahead. At a moment when old institutions are being swept away, we can’t afford to play by the same civilized rule book. Primitive helps us understand how some of our deepest, inborn traits are essential to navigating this world of dizzying change.

The key is to go ROAMING: to be Relentless in pursuing our biggest goals; to have the courage to be Oppositional; and to choose an Agnostic approach rather than specialize. To adopt a Messianic spirit, so your work becomes not just a job but a true calling; to embrace the advantages of being Insecure; and to reap the benefits of sometimes acting a little Nuts; and finally, to realize that being Gallant and noble in following one’s passions delivers the ultimate rewards.

At any stage of your career, making primitive moves can be the key to success in work and in life.