The Lost Colonies of Ancient America: A Comprehensive Guide to the Pre-Columbian Visitors Who Really Discovered America 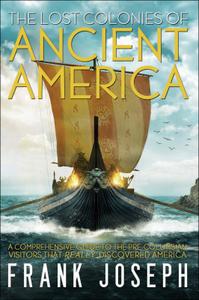 Was America truly unknown to the outside world until Christopher Columbus “discovered” it in 1492? Could a people gifted enough to raise the Great Pyramid more than 4,000 years ago have lacked the skills necessary to build a ship capable of crossing the Atlantic? Did the Phoenicians, who circumnavigated the African continent in 600 bc, never consider sailing farther? Were the Vikings, the most fearless warriors and seafarers of all time, terrified at the prospect of a transoceanic voyage?

If so, how are we to account for an Egyptian temple accidentally unearthed by Tennessee Valley Authority workers in 1935? What is a beautifully crafted metal plate with the image of a Phoenician woman doing in the Utah desert? And who can explain the discovery of Viking houses and wharves excavated outside of Boston?

These enigmas are but a tiny fraction of the abundant physical proof for Old World visitors to our continent hundreds and thousands of years ago. In addition, Sumerians, Minoans, Romans, Celts, ancient Hebrews, Indonesians, Africans, Chinese, Japanese, Welsh, Irish, and the Knights Templar all made their indelible, if neglected, mark on our land.